Detroit needs your help this weekend! The Nain Rouge is lurking and wants to wreak havoc on the city. If you’re looking for something fun to do this weekend head down to the city on Sunday, March 20th! 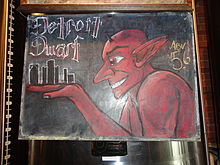 Growing up in Detroit, you may have heard of the Nain Rouge…. or maybe not. As the legend goes, in 1701, a fortune teller warned Antoine de la Mothe Cadillac (the founder of Detroit) to watch out for the ‘Nain Rouge’ which had appeared in Cadillac’s dreams. This ‘red dwarf’ represented all of the bad parts of Cadillac’s ego - anger, pride and envy, everything that was holding him back from accomplishing his goals. The Nain represented doom. When Cadillac had an actual face to face encounter with this evil creature, the Nain taunted him with all kinds of insults and profanities. Cadillac chased him away with a stick. Cadillac’s courage, endurance and willingness to face problems head on became defining characteristics of the city that he helped to establish – Detroit.

This Sunday, March 20th from 1:00pm to 3:00pm (starting at the intersection of Canfield Street and Second Avenue) is the Marche du Nain Rouge. It’s a mardi gras style parade made up of Detroiters celebrating freedom from the Nain, spring time and everything that’s good and working in Detroit. Attendees are encouraged to wear masks or dress up in costumes of any sort to disguise themselves from the Nain who always makes a rude appearance in the parade.

This is a free event so grab a disguise and help protect Detroit from the Nain Rouge! You can help chase him away and have a fun Sunday afternoon in the process.